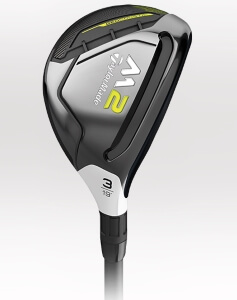 Geocoustic technology has improved the club’s performance from its previous incarnation through advanced geometry and sound engineering. The shaping of TaylorMade’s M2 2017 Hybrid includes a two-tiered sole to promote added playability from a variety of lies. The new sole design and a short, fluted hosel also work together to optimise sound and feel at impact while lowering the centre of gravity.

Equipped with the M2 REAX shaft designed in weights most appropriate for each golfer’s swing speed, 75 S-flex, 65 R-flex, 55 A-flex, and 45 L-flex. It also comes with a new TaylorMade Dual Feel Performance Grip. There is also a choice of 30 other shaft options from your local TaylorMade fitter.

The 2017 M2 Rescue Hybrid most closely resembles its predecessor in terms of the shape of the head. The white stepped crown will be familiar to users of the M drivers and fairways. The low profile face has the white groove lines going the full width. This black and white combination looks classy and helps the head appear compact. The contrasting colours on the crown can also guide alignment.

The weighting is solid, with the head moving through the hitting zone with ease, without stinging the hands. Impact can be crushing and hot. There is an improvement in the sound at impact as the ribs are on the outside.
Accuracy/forgiveness
Tracks toward the target when you hit solidly, with reasonable correction on directional misses. It is also able to maintain carry on minor mis-hits.

The M2 2017 Hybrid is designed to help average golfers replace a long iron with higher, longer, and more draw-biased performance. It is better suited for medium to slow swing speed players who need a club that gets the ball up quickly with a high flight that lands softly.
Expert at launching the ball high from good lies or off the tee the M2 2017 makes thick grass and trouble lies less easier to manage thanks to trajectory control.
The Speed Pocket generates more ball speed on low face strikes, as it has been made longer and thinner and is more flexible than before.
The stability and sound is also improved by a shorter fluted hosel that has 6 sections (previously 8). This reduces motion at impact so that more energy is transferred into the ball. The slimmer slot and the revised sole design makes it sound a little light and hollow.

Not as forgiving or as versatile as other branded hybrids on the market. Some golfers may prefer more feel and feedback.

One of the higher-rated clubs in the game-improvement category, the TaylorMade 2017 M2 delivers plenty of distance and lift from a variety of lies. The more forgiving of TaylorMade’s hybrids, the M2 features a confidence-inspiring low-face profile and a longer, more flexible slot cut through the sole to help improve the way the ball rebounds off the face.